A fleet of five identical satellites equipped with camera systems from Jena-Optronik GmbH was launched on board a Dnepr rocket from the Baikonur spaceport in Kazakhstan on 29th August 2008.

Planet Labs, a company that combines aviation and space travel with data analytics, operates the satellite constellation from Berlin. The satellites were originally designed to have a lifespan of between six and eight years. The anniversary demonstrates the performance capability of Jena’s space travel designs and the strengths of the platform. RapidEye was the starting point for a new generation of small, high-performance Earth observation satellites, which take multispectral pictures of our planet, synchronous in time and location.

The camera systems for RapidEye, developed and manufactured in Jena, work according to the so-called pushbroom principle, which means that the earth’s surface is scanned continuously, line-by-line. In this process, a strip measuring approximately 75 km in width is captured from an orbit altitude of 630 km with a resolution of 6.5 m. Each camera captures the earth’s surface in five spectral bands and thus covers the visible wavelength range as well as near infrared light.

For 10 years now, the Earth observation satellites have been reliably supplying important data for the fields of agriculture and cartography. The users are, for example, agricultural insurance companies that want to forecast or determine any damages or harvest yields.

A specific example of this kind of use are the pictures showing a comparison between the Thuringian Basin in 2017 and 2018, providing a detailed insight into land heterogeneities as well as time-lapse images of a rapeseed bloom. 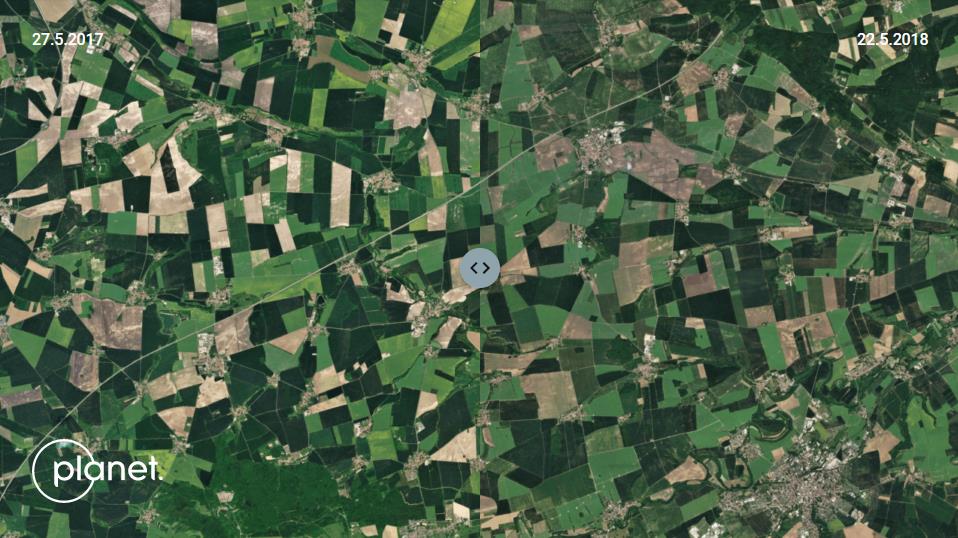